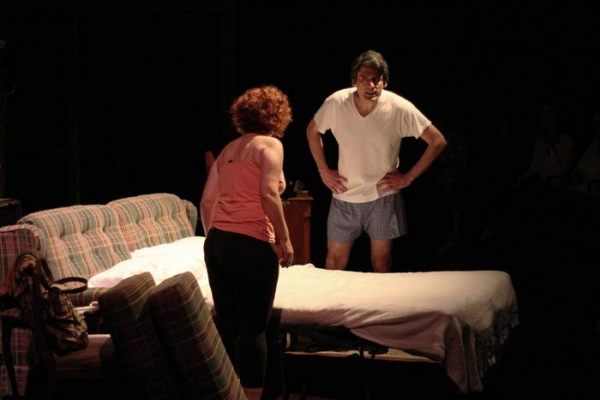 A disagreement between husband and wife breaks out on stage. Arwin Chan

After its first performance in Chicago in 2007, Tracy Lett’s August: Osage County has made its way to Broadway and to theatres all across the world. Now it’s at the Theological Hall’s Rotunda Theatre.

August: Osage County is the highly realistic story of a simple American family learning to cope with issues such as death, tragedy and old age. King’s Town Players brought this hard-hitting production to life with skillful execution, dark comedy and commitment to the roles they were portraying.

The play is based on on true-life excerpts from parts of Lett’s life, including the suicide of his grandfather.

Lett wrote this play as a cathartic release for all the pain that certain life events had caused him. That must be why each character comes across so authentic and relatable.

As the play begins, we’re cast into the Pawhuska, Oklahoma living room of aging couple Beverly and Violet Masters. Violet, who is sick with oral cancer is constantly on the verge of delirium caused by her medication. Beverly is a depressed alcoholic, which he makes clear through his opening lines.

The story unfolds as Beverly goes missing, and the family comes together in a struggled attempt to console one another as they worry about where he may have disappeared to and struggle with the thought that he may never return.

The actors, who stayed true to their characters flawlessly throughout the entire production, gave us an accurate portrayal of the anger, frustration and stress that any family would be under in such an extreme situation.

As the clock ticks on and Beverly still isn’t found, the audience saw all kinds of familial relationships being called into question.

Mother-daughter relationships, husband and wife relationships and even sisterly relationships begin to deteriorate under the pressure. The whole family struggles to remain collected.

Although the play started off slow, audience members slowly became invested in the lives of the characters. By the time intermission was called, no one wanted to leave their seat.

Something that was hard to miss was a lack of constant set changes throughout the play, and perhaps the most interesting part of the production is how the entire play takes place in the same room.

The one-set production shows how many events and emotions can pass through one simple foyer.

August: Osage County left the viewers feeling entertained while also giving us pieces of the reality that many families struggle with, allowing us to reflect on our own lives.