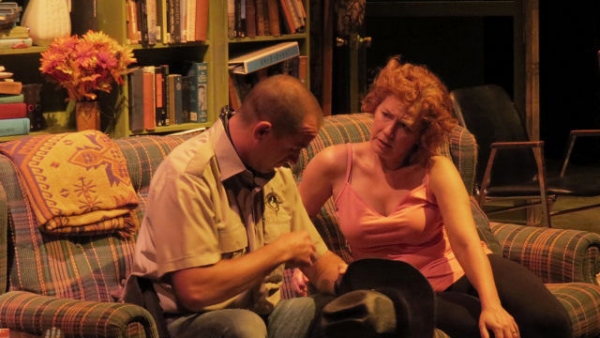 For its season opener, the King's Town Players have ambitiously tackled the dark comedy-drama August: Osage County, and have done so admirably.

The Tracy Letts-penned play won the 2008 Pulitzer Prize in drama, and was recently adapted into a Hollywood film starring Julia Roberts and Meryl Streep.

The play follows the fractious Weston family as they reunite at their Oklahoma home after the family's patriarch goes missing.

As is often the case when fictitious families get together, secrets are revealed and old wounds opened, and this one doesn't disappoint in those categories.

At the heart of the story is the volatile relationship between pill-popping mother Violet Weston, who suffers from cancer, and the eldest of her three daughters, Barbara, who hasn't been home in years after moving to Colorado when she got married. Their relationship is one of confrontation more than affection.

With more than a dozen characters with speaking roles and a three-hour running time, there are plenty of other storylines woven into the play along the way.

That's what makes the King's Town Players' production so intriguing. It's hard to keep an audience rapt for two hours let alone three, but this play does so admirably.

Sure, the play's razor-sharp dialogue deserves some of the credit, but so do the actors.

In particular, I thought Krista Garrett's Barbara was terrific. Her character's accent was subtle and emotive, and her facial gestures when I could see them -- I was seated to the side and sometimes only had the back of characters' heads to look at -- were spot on.

I particularly liked the play's subtler moments. For example, when sister Jean finally arrives and helps set the table, I liked the way Barbara straightened out her distracted setting of the table with just an occasional eye roll.

As the vitriolic Violet, Cathy Griffin gives a solid performance, but a few times I wish she would have reined in her accent just a smidgen. Still, it's a challenging and juicy role, and she's a strong counter to Garrett's Barbara.

To be frank, there wasn't a weak performance in the entire cast, which, for a dozen actors, is saying something. But there were a few standouts in my opinion.

Set up in the Rotunda Theatre inside Queen's University's Theological Hall, the two-tiered set is one of the stars of the show, too.

On the floor are what appears to be three different rooms -- a den, a dining room and a study, each of which is the focus of the action at different points. Behind, there is a staircase that leads to a second floor and an attic.

I also liked the way co-directors Michael Catlin and Sean Roberts deftly used the set. When Barbara and husband Bill (Ilke Hincer) argue in the TV room while unfolding the sofa bed, daughter Jean sits on the stairs above listening quietly. Similarly, while the sisters discuss things in the study, other characters silently play cards at the dining room table.

The drawback for some might be the three-hour running time and the, at times, unsavoury language. While three hours may seem like a long time, it certainly didn't feel that way.

While the play features its share of squabbling and the play's themes dark, it certainly makes for a compelling night at the theatre.

This email address is being protected from spambots. You need JavaScript enabled to view it.
twitter.com/petehendra

A drama written by Tracy Letts.

A King's Town Players production running until Sept. 27, with performances Wednesday to Saturday at 8 p.m. in the Rotunda Theatre in the theological building on the Queen's University campus.

Last modified on Sunday, 12 October 2014 21:34
Tweet
Published in Media
More in this category: « New stage in troupe's future A family affair »
back to top