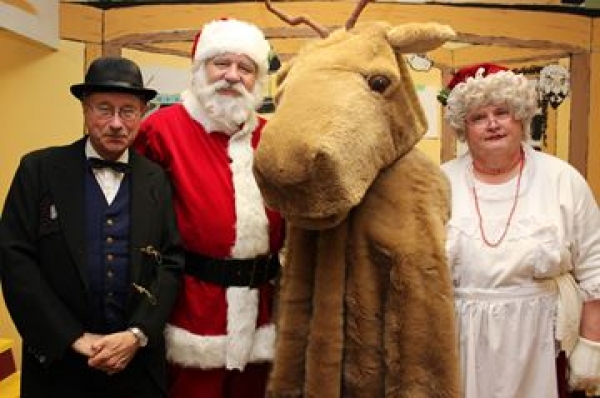 Dr. Fiendish McAwful and his assistant, Eyesore, have a plan to steal the secret of Santa’s flying reindeer so they can follow him around on Christmas Eve and substitute coal for all the presents.

Can they be stopped in their Grinch-y quest?

This is the plot of the King’s Town Players’ latest play, Santa Claus, the Panto; it was written and directed by Richard Linley, who also plays Santa Claus in the show.

The play is written in the style of an English pantomime, which are typically musical comedies that use the plot of classic fairy tales.

“In this case, I made it up instead,” Linley says, explaining that pantomimes are something of a holiday tradition in the UK.

“They’re always done during the Christmas season but they’re seldom, if ever, about Christmas. Christmas is usually not even mentioned. But I’ve determined that since we’re not in the UK, I can write one that is not only about Christmas, but set at Santa’s workshop.”

The music in Santa Claus, the Panto consists of well-known secular Christmas songs with a bit of a twist.

“I’ve put in mostly my own lyrics,” Linley says. For example, Carol of the Bells becomes Carol of the Smells, a song about the wonderful aromas of Christmas.

Linley has also written two other more traditional pantomimes, based on Cinderella and Aladdin.

“They’re just a lot of fun to do,” he says. “You get to dress up oddly and there’s a lot of flexibility in terms of improv.”

One person who is certainly having fun with the dressing up oddly aspect is Peter Lovett, who plays Santa’s wife, Ostentatia Claus, in the classic pantomime tradition of cross dressing.

“We did this show five years ago and I rather enjoyed it,” says Lovett, noting that “it allows me to be even sillier than normal. Even though I had a busy schedule when I heard Richard was going to direct again I phoned him up via the email and I said ‘if you’ve got a part for me count me in’.”

Other notable aspects of the show: A singing reindeer named Cosmos, and ‘Twas the Night Before Christmas performed in sign language.

“I wrote a special [sign language] part in this version of the show because we have a deaf person, [Hailey Hudson] in the cast,” Linley explains.